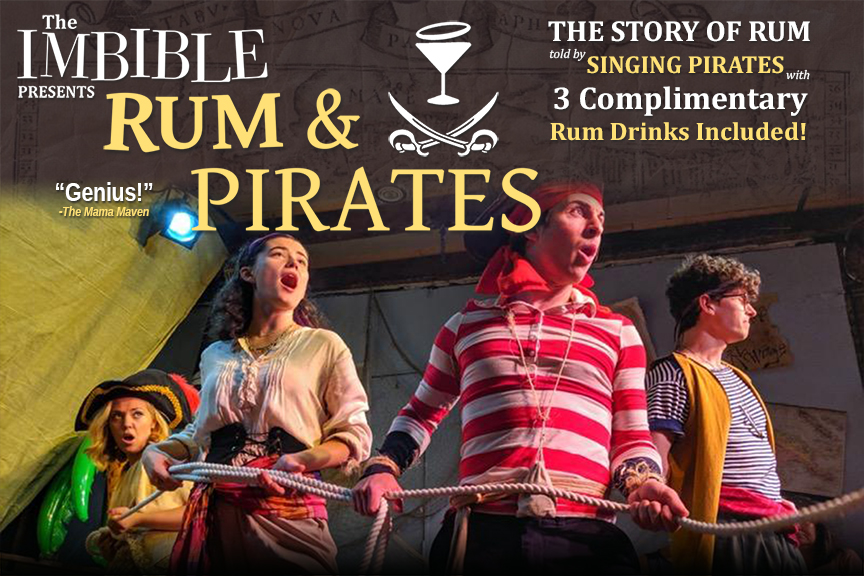 THE STORY OF RUM TOLD BY SINGING PIRATES!

Join us for New Pirate Onboarding as we muster our crew for the maiden voyage of the Pirate Ship Bumbo! We’ll cover everything there is to know about how to be a successful pirate, starting of course with the history, applications, and proper appreciation of rum. Follow this tropical spirit from its origins in Persia, through the pivotal role it played in forging colonial empires on both sides of the Atlantic by powering the infamous Triangular Trade, to the creation of classic modern-day drinks like the Daiquiri and the Hurricane. Along the way, you’ll be treated to three complimentary rum drinks including authentic pirate recipes while you enjoy gorgeous, traditional sea shanties and experience a taste of life aboard a golden-age pirate ship – all woven into THE IMBIBLE’s signature mix of comedy, science, history, and some of the best drinks in New York!

RUM AND PIRATES is a can’t-miss for all budding buccaneers seeking spirited adventure on the high seas! A limited number of First Class Tickets are available for each performance that include seating on deck with our crew, as well as a Guided Rum Tasting of silver, aged, and dark rums led by our Pirate Captain at the end of your journey.
No late seating. Selected drinks are part of the performance, so we cannot make substitutions. You must be 21 or over and show proper ID at the door to attend.

“A no-brainer – who turns down music, comedy, pirates and rum drinks?”